ON Thursday the 16th April 2015 we hosted a public meeting in Lochcarron, held at the church hall. to update the community about the changes and developments now that we are owners of Kirkton Wood. There was a good attendance on the evening despite the meeting clashing with another one in the village hall.

The meeting was Opened and speakers introduced by Director Vicky Stonebridge, who explained the new name for the umbrella organisation of Lochcarron Community Development Company and why a new trading art subsidiary of Kirkton Trading ltd. has been set up. She then introduced the first speaker, Malcolm Morrison who has been working on the Forest management plan, and assisting in a consultancy capacity.

Malcolm outlined where we are and what happens next. A felling license is in place, this lasts for 5 years and covers everything, which gives us flexibility to fell anything within the woodland in that time period, but does not mean we have to fell it all, that remains a decision to be taken by the community.

The permission for a haulage road is also in place. A digger is on site and the work on this is due to start on the 20th April with DAM construction. Invitations to tender for the harvesting of the woodland have gone out to seven different contractors, some have been on site to view the timber. We await responses and prices at present.

next speaker was our Forest Officer Piotr Godziszewsk, who has been working on the project since January. He went into more detail of the current state of the woodland and what could be done, the challenges and opportunities ahead.

Piotr illustrated his talk with some images. This one shows Kirkton woodland from around 2009.  A later picture from google Earth clearly shows increased windblown trees. This is not the latest aerial view as many more trees have blown down in the winds since January 2015. 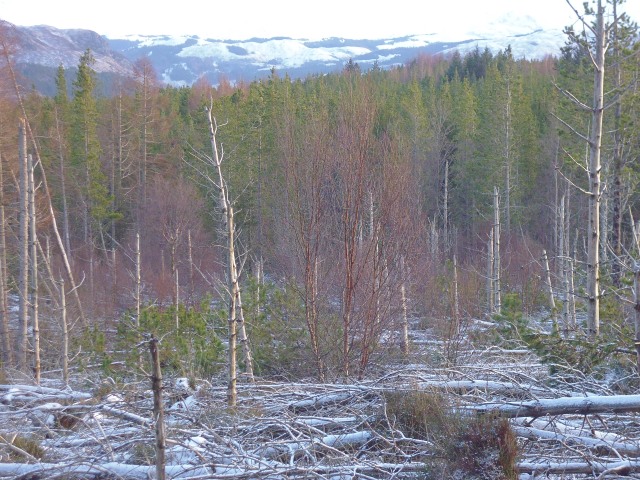 In this photo of Piotr’s we can see how the windblown trees have allowed some native tree regeneration, by giving protection against the deer. However the need for harvesting the lodge pole pines is apparent, while they could have grown another few years on good ground. With poor management and no drainage on site they have reached ‘terminal height’ which means they are very unlikely to grow any more before blowing down and presenting and extra cost and challenge to remove, also loosing their value as timber.

This map shows the current situation in the woodland, the hatched areas are windblown trees. 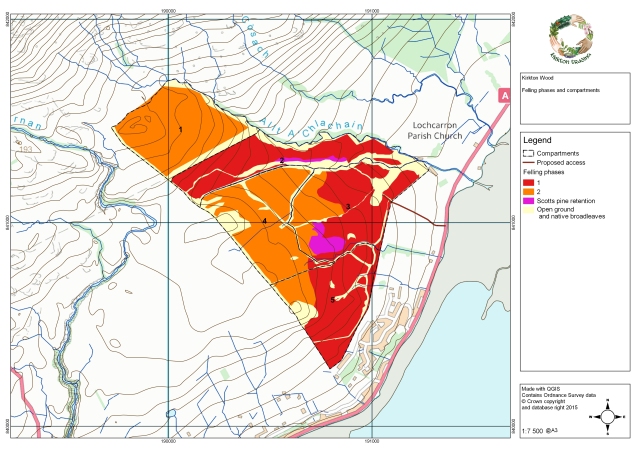 This final map is a vision of what ‘might’ happen in the future in the woodland. The Highland Council recently required local companies and organisations to submit any future development proposals for consideration in their 20 year local development plan. The above was submitted as an example of the activities the community have suggested and which may be included in the wood in the future after felling & replanting have taken place.
It includes recreational access and activities, a working areas including such things as a fire wood business. Also a green burial site, poly tunnels, huts and a community orchard. We are currently investigating which or these is viable in the immediate and shorter terms.

When Piotr had outlined these ideas and progress, Questions were then taken from the floor to both Piotr & Malcolm.

What species of trees will be replanted?
We won’t know completely which species will be appropriate until harvesting is completed and we can investigate the lie of the land and soil condition better. At the moment the proposal is for a mixture of some ( around 40% ) of coniferous trees for future commercial income generating, and 60% of native broad leaves for amenity, biodiversity and recreational use ( as well as some commercial hardwood timber use ) . There is also a potential to pilot some alternative species of trees to experiment for good timber yields, food crops and increased resilience against new disease strains.

If firewood is  available what kind, hard or soft wood?
In the future hardwood could be used but at the moment any hardwood in the forest is too small and immature to add to the firewood business, so the windblown and softwoods would be used.

will the stumps be removed?
Only in areas which need to be cleared for building or recreational clearings, otherwise it is not cost effective to do so.

the Scots pine that remain will they blow down too?
This is a possibility, but as they are stable just now it is a risk worth taking to maintain some standing timber for the appearance of the wood and to allow natural regeneration.

what will happen to the timber ?
This depends on which contractors take on the job, current market demand, the smaller trees could go to Norbord east of Inverness for chip board, to Invergordon for pulping, or to Fort william, they could be used as pallets or woodchip. Some of the larger trees could be used for saw logs, but most are small and low quality timber.

could there be a tree nursery?
Yes, this could be a possibility. usually it is more economic to gather local tree seed and send it away to nurseries to be grown on as it grows faster elsewhere. But due to current problems with tree diseases, for example ash die back. There might be a need to grow our own locally and minimise transporting of the young trees. This is being investigated.

could there be wood pellet making facilities?
It depends on cost and demand. It si something we could look into, other organisations have investigated this in detail, We will look into this in more detail for this area.

when will felling start?
This could start early May/June- this depends on timber market, as it may be better to hold off until the prices rise or until demand increases.

When will the access road start?
This will starts next week and should be complete in 2- 3 weeks.

Will SRDP ( Scottish Rural Development Programme) grants available for replanting, improving access, etc ?
Some of these will be available hopefully for some aspects of the the project. We are already working on this.

Is the timber mature enough to take out?
Yes, because of the ground conditions and the rate that the trees are being blown over, it is essential to harvest them now before any further costly damage.

The meeting was then concluded, Many thanks to our speakers and everyone who attended and continues to support this big community project.

We will continue to hold public consultation meetings like this, in the meantime, if you have any queries or comments please e-mail us at lochcarronkwhg@gmail.com