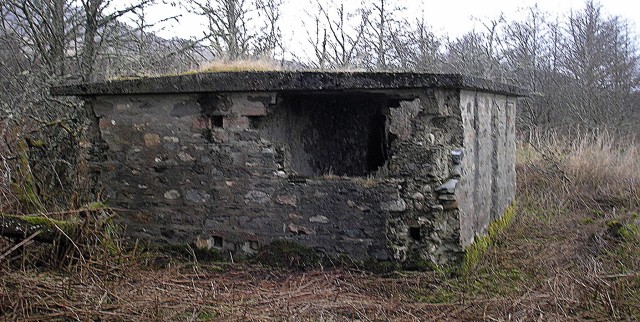 1. The thickness of the walls and roof.

2.The robbed stone from the corners.

3.The faint impression of the outer wall running down the right edge and along the bottom of the photo.

From the Ordnance Survey maps survey dates, this structure was built sometime between 1902 to 1907 (most likely nearer 1902 than 1907). It being built, possibly over safety concerns, to replace the original which was located at the south east side of Battery Park in the centre of Lochcarron, and used to store munitions for the artillery battery that was based in Lochcarron.

The structure is approximately 5 metres square and 2 metres high, its walls are some 40cms thick throughout and roofed by concrete slabs 20cms thick in the centre thinning to 15cms at the edge. It is sub divided internally into three rooms, the two smaller ones having smooth cemented floors while the larger room has a dirt floor. Finally, it was surrounded all round by a substantial wall of 40cms thick to an unknown height (now only exists to one course in height).

All the stone from this outer wall along with all the corner stones and doorway edging stones of the magazine have been taken for reuse, indeed, if it were not for the weight of the roof which would cause a potential collapse, then it is likely that all trace of this structure would have been lost to history as people usually reused any good building stone. 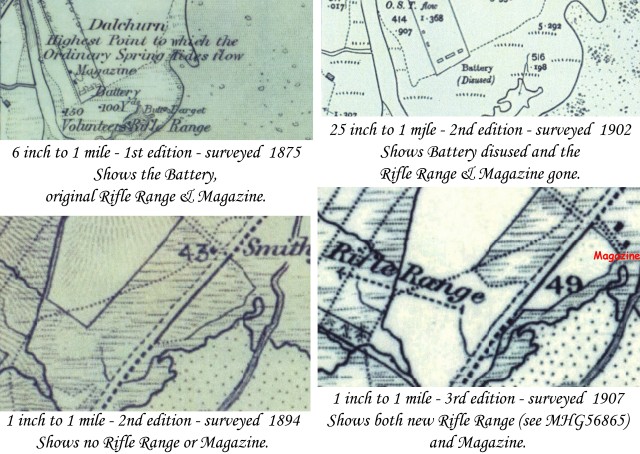 This room takes up half the building and has an earthen floor. The other half is split into two rooms, approx one third-two thirds and has smooth cement floors.